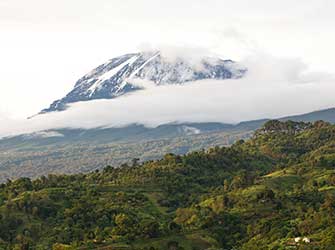 At 5,895 m, Kilimanjaro is the highest point in Africa. This volcanic massif stands in splendid isolation above the surrounding plains, with its snowy peak looming over the savannah. The mountain is encircled by mountain forest. Numerous mammals, many of them endangered species, live in the park.

Kilimanjaro, by any name, is a metaphor for the compelling beauty of East Africa. When you see it, you understand why. Not only is this the highest peak on the African continent; it is also the tallest free-standing mountain in the world, rising in breathtaking isolation from the surrounding coastal scrub-land – elevation around 900 meters – to an imperious 5,895 meters (19,336 feet).

When should I go?

Kilimanjaro is climbable all year round. The best months to climb are December-March, and September-October, which are the warmest and driest months. The next best are June to August, but they are colder. July, August, and September are the busiest months. Summiting on or soon after a full moon is very beautiful and helps illuminate the landscape without using headlamps. However, it is also very bright for sleeping and stars are not as visible.

Do I need to take malaria medicine?

Malaria is a serious problem in East Africa so you must consult your doctor about getting effective malaria prophylaxis for your visit. Many people are avoiding Lariam nowadays and using Malarone. You cannot catch malaria above 3000 meters on Kilimanjaro, but you must be careful below that altitude, particularly if you visit the coast where the strains of malaria tend to be especially virulent.

Temperatures range from 25 to 30 degrees Celsius at the foot of the mountain and -15 to -20 degrees Celsius on top plus wind chill. Lower down, it can be wet and humid, but higher up, there can be snow. Rain and snow may be encountered any time of the year!

How difficult is it to climb Kilimanjaro?

It requires no technical climbing experience, and any moderately fit person can summit the mountain.

Which route should I take?

Your decision will depend on where you want to sleep and the hiking distance each day and number of days of each route. On the Marangu Route, you sleep in huts with simple beds, while on all the other routes, you sleep in tents. There are two main routes on the mountain: the Marangu and Machame. You may also want to consider the Rongai Route as it is far less traveled. The Lemosho Route is a good choice if you want a longer route (8+ days).

Why is the Marangu route called the "Coca Cola" route? Is it really dirty and overcrowded?

There has been a lot of negative press about Marangu. In our view, and we arrange treks on all the routes, it is very unfair. This is the only route that uses huts rather than tents and some years ago there was a serious problem with overcrowding in the huts. In those years the Machame route was much less frequented. But we think the main reason that some operators speak against the Marangu and boost the Machame is that the booking system for Marangu is demanding of operators' time. There is no booking system for Machame (nor the other camping routes). You just show up at the Machame gate the first morning of the trek. No one ever knows how many people will be on the trail until the gate closes for that day. There is a daily quota of only about 70 climbers allowed to start on the Marangu route on any day (this is why booking is not always easy). There are many days in the season when there are many more climbers on the Machame route than on the Marangu. This is not in any way to denigrate the very beautiful Machame route. But these are things to bear in mind when hearing the Marangu route described as the tourist, easy or Coca Cola route and the Machame as the scenic or the whiskey route! It is true that you will hear many people who have climbed Machame say that it is better than Marangu, and this is conveyed to many of the guide book writers. But remember that the overwhelming majority of climbers only ever climb one route. The chances are that the climbers who say this have never been on the Marangu route and are simply repeating what they have been told or have read.

How is the Marangu route different from the Machame route?

Physically, the Marangu and Machame routes are rather different. The main force of Kibo's volcanic activity occurred out towards the west (the Machame side) and so Machame is steeper - especially in the first day and a half - and more rugged than Marangu. It is often considered more scenic because the views of Kibo are more impressive than from the south-east (the Marangu approach), but many consider the vegetation on day 2 of the Marangu route to be more attractive than anything seen on the western side. As always with mountains, every route has its advantages and drawbacks. The difficulty grading has Marangu as a 1, and Machame a 1+, so there's not a great deal in it.

How do I cope with change of altitude?

Always remember to maintain a slow, steady pace from beginning to end. Going slowly allows the body to acclimatize while hiking. Those who start out too quickly will have troubles higher up the mountain as the body will be overexerted. This still holds true if you are spending an extra day on the mountain.

How long does it take to reach the summit?

It will depend on the route you pick and your pace. It can take from 4-8 hours to reach the summit from the high camp.

What is an anorak?

A weatherproof jacket, such as Gore-tex.

Why do we make the final ascent in the pre-dawn darkness?

Most groups will start for the summit on ascent day at 11 PM to 12:30AM, depending on the perceived fitness of the group, the weather and the route. The pre-dawn hours, while cold, are also the calmest and clearest. The best views from the summit are at dawn. Often clouds and high winds develop not long after sunrise making the summit much less attractive and the descent more difficult. Guides who have been to the summit scores of times report that it is very rare to find it cloudy at the summit at dawn in any season. The ascent day is a very long day of hiking. Some people may require 15 hours to reach the summit and descend to the campsite for that day.

What shots should I get?

How many guides, and porters and cooks do we get?

The number of staff that you will have depends on how much gear and weight is brought up the mountain, the route chosen and number of days on the mountain; however a typical trek will have (per 4 persons); 1 guide, 1 assistant guide, 1 cook, 1 waiter and 9 porters.

Are the guides trained in first aid and altitude sickness?

Kilimanjaro guides are trained in acute mountain sickness (AMS) and basic mountain first aid. However, they are not doctors or paramedics. Climbers are responsible for bringing their own first aid kit and medical supplies.

Kilimanjaro guides are trained and certified by the Kilimanjaro National Park. They start out as porters and work their way up to assistant guide. When they are ready (after about 2-4 years), they go through the national park certification process.

What happens if we one of us gets ill and has to return earlier? Is there an extra charge or is our money returned in case of illness or injury?

If a client cannot walk because they are injured or sick, at least two support staff will assist this climber down. There is no extra charge for coming down and taken back to the hotel, but you will get no money back for that mountain days you missed, and you will be responsible for medical assistance and extra hotel nights. We highly recommend travel insurance to cover any medical expenses and further evacuation

What additional costs can I expect when I travel with you?

How much is a good tip?

The typical tip is:
Porters $5 per day per porter
Cooks $8 to $10 per cook
Assistant Guides $8 to $10 per guide
Kilimanjaro Guides $20 per day and up per guide
*Tip amounts listed for Kilimanjaro are per group, not per individual traveler. For instance, if four people are on Kili, they should each contribute $5/day if they want to tip the lead guide $20.

What is the deposit amount to hold my space?

A 10% deposit is required at time of booking to hold your climb/safari.

When do I need to pay the balance of my climb/safari?

Final (90%) payment to be made in cash on your arrival in Tanzania.

What kind of accommodation is available during climbing?

On the Marangu Route, the first two huts sleep four people each, and the last hut is dorm-style with bunk beds. While on the other routes, you sleep in 3-person 4-season dome-style mountain tents, two people each.

Do you accommodate people with dietary restrictions?

Vegetarian and other special diets can be accommodated. Please let us know ahead of time and remind your guide during your trek briefing. Protein options may be minimal on a vegetarian diet, so you may want to bring protein supplements.

Can we bring something for the porters?

Donations are easier to take with you when you travel to Tanzania rather than mailing them after you get back from your trip. Porters welcome old hiking boots, warm clothing, and cash donations. 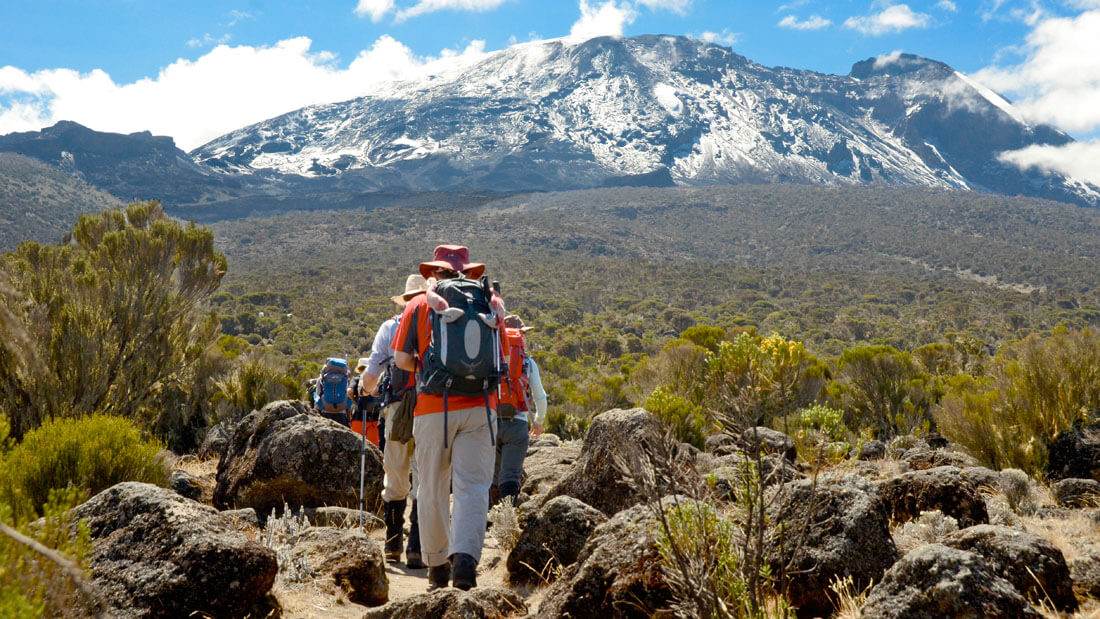 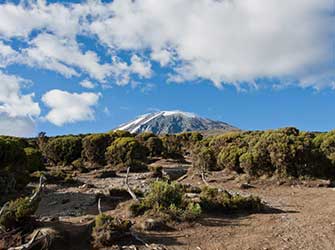 "Nowhere quite matches Tanzania for open savannah and if you're lucky enough to see the great migration as it roams across the legendary plains of the Serengeti National Park, you will have witnessed one of the most incredible wildlife experiences on the planet."

Mgalaa Expeditions, is a safari and trekking company based in Moshi – Tanzania, committed to providing its clients with the highest quality safaris, mountain climbing, and cultural experiences. Read More