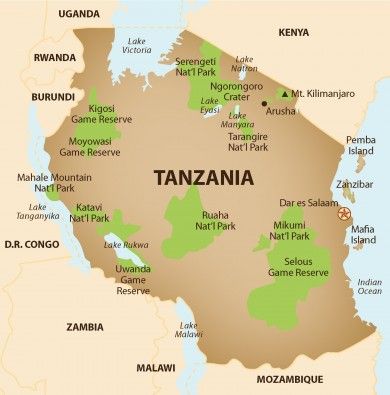 The United Republic of Tanzania is a nation in central East Africa bordered by Kenya and Uganda to the north, Rwanda, Burundi and the Democratic Republic of the Congo to the west, and Zambia, Malawi and Mozambique to the south. The country’s eastern borders lie on the Indian Ocean.

The United Republic of Tanzania is a unitary republic composed of 26 mikoa (regions). The current head of state is President Jakaya Mrisho Kikwete, elected in 2005. Since 1996, the official capital of Tanzania has been Dodoma, where parliament and some government offices are located. Between independence and 1996 the major coastal city of Dar es Salaam had been the country’s political capital. Today Dar es Salaam remains the principal commercial city of Tanzania and the de-facto seat of most government institutions. It is the major seaport for the country and its landlocked neighbours.

The following is duty free:

The local electricity supply is 220 volts, 50 cycles ac. You will need to supply your own international standard adapter for your electrical appliances.

Malaria occurs below 1800 meters and you should use the recommended prophylactics. Please consult your doctor about these. Woman using oral contraceptives should consult their physicians before using prophylactics. The best way to prevent contracting Malaria is to try and avoid mosquito bites by using an effect insect repellent, by sleeping under mosquito nets and to wear proper clothing after sunset. Meningitis can be present during the dry seasons.

As a sensible precaution we recommend that you consider getting at least some of the following recommended immunisations:

Please check with your local travel clinic for the latest recommendations.

An onward ticket and sufficient funds are required when entering Tanzania. Tanzanian people are friendly and will always offer a helping hand.

It is strongly advised to take out travel insurance which should cover baggage as well as personal accident and medical insurance and specifically covering your Kilimanjaro expedition.

The official languages are Ki-Swahili and English. There are more than 120 tribal vernaculars.

Mainly Christian, Muslim and Traditional beliefs. Please keep in mind that you are entering a different country with strong religious customs.

As with any other town, walking alone at night is not advisable, and it is preferable to use taxis which are available at most hotels. Do not leave cash or valuables in your hotel room and use a safe deposit box.

Make use of a safe deposit box to keep your belongings safe, and do not leave anything of value lying around in your hotel room.

"Nowhere quite matches Tanzania for open savannah and if you're lucky enough to see the great migration as it roams across the legendary plains of the Serengeti National Park, you will have witnessed one of the most incredible wildlife experiences on the planet."

Mgalaa Expeditions, is a safari and trekking company based in Moshi – Tanzania, committed to providing its clients with the highest quality safaris, mountain climbing, and cultural experiences. Read More